Linux Mint 20.1 is a desktop anyone can love

Jack Wallen kicks the tires of Linux Mint 20.1 and comes away astonished at what the developers have accomplished.

I’m glad Linux Mint exists. That’s a strange statement, coming from someone who has never opted to make it their default desktop distribution. I’ve never been a fan of Cinnamon or Mate, and I’ve always thought Xfce was a solid desktop, but just not for me.

Even though I’m not terribly keen on the offered desktops for Linux Mint, I still believe it to be a fantastic distribution. Why is that? One reason is that it’s most ardent fans are almost Apple-like in their fanaticism. From my perspective, that’s a good thing. Linux has long needed a desktop distribution which elicited that much excitement from the user base. Once upon a time, that title would have been bestowed upon Ubuntu. Alas, a few bad choices along the way and the rabid fanbase isn’t quite so rabid.

That’s fine as well, because we all know, without Ubuntu, there’d be no Mint (or Pop!_OS, or elementary OS, etc.), and without Debian, there’d be no Ubuntu.

Besides, this is supposed to be about Linux Mint. So, let’s get on with it.

I’m not going to approach this as the standard review–you know what Linux Mint is about and it’s incredibly easy to read the release notes for Ulysses (the 20.1 nickname). With that in mind, I’m going to take a different tack on this and answer the question, “Why can anyone love Linux Mint 20.1?”

Linux Mint 20.1 is, without a doubt, the most polished release I’ve seen come from the developers. The improvements they’ve made to the desktop make it such that anyone jump into this operating system and start using it–and I do mean anyone. By continuing to stick with a most familiar desktop metaphor, Linux Mint is immediately familiar to any user of any skill level. The simplistic desktop menu is a joy to use. It’s not filled with bells and whistles, it hasn’t reinvented the wheel, it just is and it works to absolute perfection.

Personally, I find desktops like GNOME more appealing, but knowing the average computer user like I do, Cinnamon is far ahead of GNOME, when it comes to user friendliness. The latest release of Cinnamon is a perfectly spiced icing on an already delicious cake–one that would even make the likes of Paul Hollywood offer up the coveted handshake.

There is one feature, new to Cinnamon, that (for me) really stands out. That feature is the new Web Apps tool. For anyone that likes to create apps from websites, Linux Mint 20.1 makes this incredibly easy. Launch the Web Apps tool from the menu, click the + button, fill out the necessary information, and click OK (Figure A). 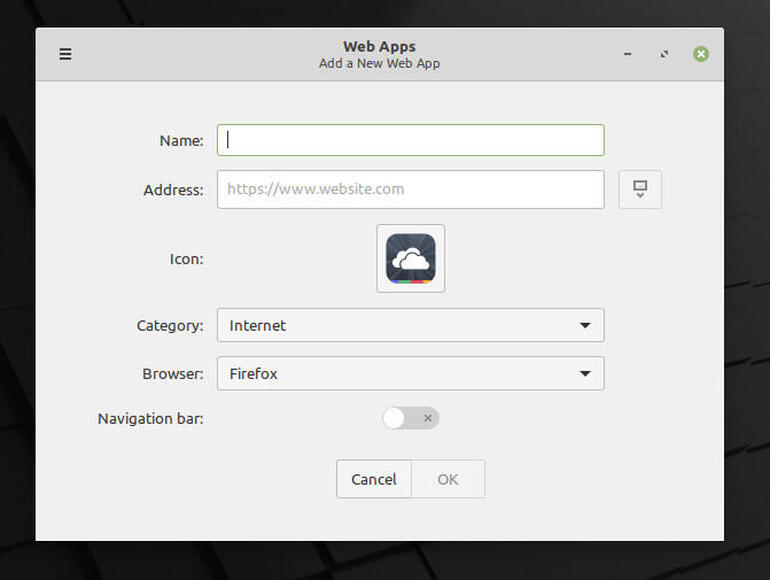 Once you’ve created the web application, you can search for it by name from the Cinnamon menu. Launch the web app and the site will appear in a web browser window, without the navigation bar or other usual accoutrement (Figure B).

TechRepublic as a web application.

Web Apps might not be for everyone, but they certainly make using certain websites fast and simple.

If you’re a user who likes their desktop operating systems to perform with an almost immediate response, Linux Mint 20.1 might be just what you’re looking for. The developers have done an outstanding job of eking out as much speed as possible from the desktop. Of course, it helps to have a desktop that’s as lightweight and performant as Cinnamon. However, with most lightweight desktops, you feel like you’ve traded features for speed–that’s not the case here.

With Linux Mint 20.1, you get the best of both worlds, speed and features. Even when running this latest release in a VirtualBox VM, with only 3 GB of RAM, it is astonishingly fast. Apps open almost immediately and nothing seems to slow it down.

So for anyone who prefers speed over eye candy, this distro is for you.

Cinnamon (the default desktop for Linux Mint) isn’t on the level of Deepin or KDE for special effects and “wow” factor. That doesn’t mean it’s bereft of eye candy, it’s just a bit subtle. Anyone who’d like to add a bit of panache to their desktop, Cinnamon makes it really easy to do so, without having to install a single thing.

If you open the Settings tool, you’ll notice a Themes button. Click that button and then click the Add/Remove tab to reveal a fairly extensive listing of themes you can download and apply (Figure C). 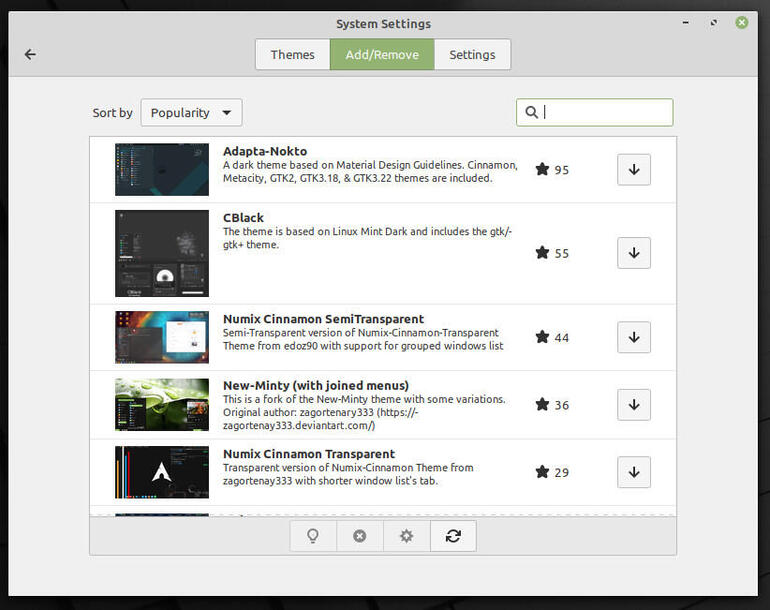 Finding and adding a new theme to Cinnamon is incredibly easy.

To achieve this in GNOME, it requires the jumping through of a few hoops that new users wouldn’t even try.

There’s a really cool new application to be had with Mint 20.1. Said application is called Hypnotix. With this app, you can watch free TV from around the world. Open the app from the menu, click TV Channels from the main window, and select from the numerous channels, spread across numerous countries (Figure D). 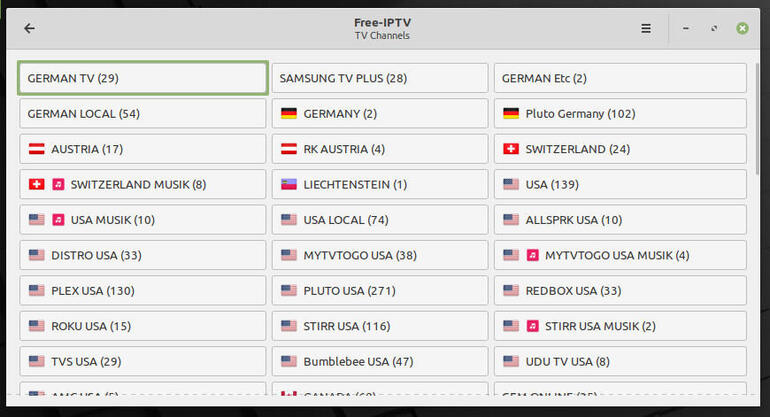 The channel listing within the Hypnotix application.

When you click on a channel, Hypnotix will open a new window, where you can view whatever is live at the time. However, don’t be fooled, as this isn’t a DVR. You can’t select programs, it’s all about the live experience.

A few things to note about Hypnotix. Chances are pretty good it won’t be the application to finally convert you to a “cable cutter.” A good number of the channels are obscure and finding something worth watching might take you a bit of time. Also, once you start watching a channel, the only way to close the child window is to close the app itself. This is frustrating, especially when you’re just trying to find something interesting with a bit of channel hopping. Hopefully this bug will be ironed out in updates to come. Even with the bugs, Hypnotix looks very promising.

Are you the perfect Mint user?

I’m not because I prefer my desktop to veer a bit more toward the modern. That being said, Linux Mint’s latest release will have an exceptionally wide appeal. Anyone looking for an incredibly stable, robust, fast, clean, and user-friendly desktop operating system could do a whole lot worse that Linux Mint 20.1.

Even though I’m not a Mint user, I’m still a big fan. Every Linux desktop distribution should strive to do exactly what Linux Mint 20.1 has accomplished–create a desktop that is the perfect balance of speed, features, and user-friendliness.

Subscribe to TechRepublic’s How To Make Tech Work on YouTube for all the latest tech advice for business pros from Jack Wallen.

You don’t want to miss our tips, tutorials, and commentary on the Linux OS and open source applications. Delivered Tuesdays